Greenland – The Journal of My Journey (Pt. 2)

Here it is, the second of my three posts about Greenland, featuring extracts from the journal I wrote while on expedition.

I like this entry because it captures the range of emotions experienced on trips like this: soaring highs and crushing lows, often in the same day.

Failing to make it to the top of this peak was heart-breaking at the time. But even in the moment I recognised that it was one of the most magnificent mountaineering experiences I am ever likely to have. I hope that the photos give some sense of that…the sheer beauty and majesty of the environment we were in.

It’s a blustery old evening out there; -7 C, gusting 30 mph, cloudy and with drifting snow too.

There is something ‘hygge’ about being in a tent while wind and spindrift beat down on the canvas. We have Johnny Flynn playing in here and, in contrast to conditions outside, it feels very civilised; almost pleasant.

Less pleasant was the nearly 7 years out-of-date ‘hot cereal start’ I just shovelled down. I’m sure it is exactly what I need to help me recover but man did it pale in comparison to the shortbread biscuits of 30 minutes ago.

But I’m prevaricating, the big news today is that we were defeated, for a second time, by old Mt. Doom. This latest excursion was the hardest physical thing I have ever done. To come up short is brutal…we were only 30 vertical metres off the summit in the end 😦

Despite our ostensible failure though, the outing was the most amazing and beautiful mountaineering experience I’ve had to date:

Louis silhouetted in front of the peak of ‘Mt. Doom’

Inexplicably, after a whole day of completely clear skies, hill fog formed just before our pre-departure SitRep; an absolute hammer blow for our morale. It wasn’t hugely thick cloud, so we resolved to rest for another 2 hours, hope for the best and set off at 0100. I couldn’t sleep for those final couple of hours. Whether due to excessive rest, excitement, or both, I just couldn’t get my mind to quieten and instead just lay there watching my thought-train runaway down several different tracks.

1am. Clear at last…we are ready for the off!

By the time we left camp it was clear, cool (-16 C) and with so little light that a star or planet was visible above one of the nearby mountains. Cameras really reveal how little light there is at this time of the night – one needs a super slow shutter speed – but because the snow-covered ground reflects every photon of incoming light it is still easy to see, although subtle changes in the gradient of the terrain can be hard to detect.

Anyway, we set off into the cold, skiing quickly up Markusdal with a light katabatic breeze in our faces – I accumulated much frost on my facial hair. The skies to our south were magical, a beautiful gradient of indigo through pink, and with cold snow in the gully the conditions under-ski were fantastic.

The tiny valley of Markusdal 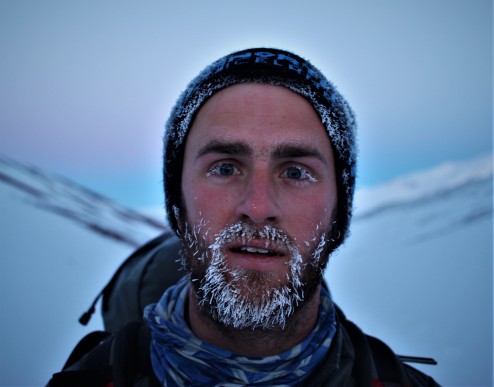 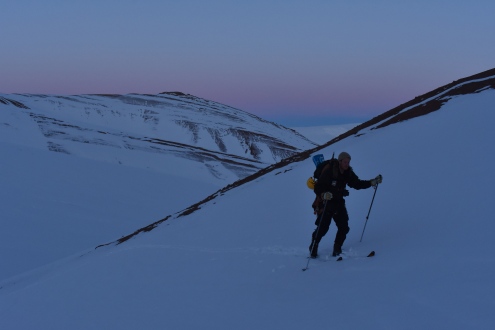 There then followed a horrifically steep ascent up a ridge towards the first of the three cols we needed to cross. Once we were up this the views were amazing, with the sun visible just above the northern horizon and alpenglow on the mountains behind us. It was breathtaking. We could see northwest into the heart of the Stauning Alps, where a nocturnal inversion had set up, trapping a layer of cloud below about 2,500 ft. In the other direction, the icebergs of Scoresbysund fjord glinted in the midnight light. They looked tiny within the vast, empty white.

We continued at pace along the broad ridge, our spirits rising as the sun did the same, and Mt. Doom drew closer and closer.

3 am. Alpenglow appears on the mountains to our south

The return of the sun. A very welcome sight!

The final ridge up to that mountain was the hardest bit. I already felt light-headed and dizzy from the night’s exertions and I simply couldn’t boot-pack (skis strapped onto one’s backpack) with an ice-axe and crampons…I had to stow the axe and get my poles back out, and even then I kept falling over, such was the weight on my back and the softness of the snow underfoot.

Some steps up the slope were simply too much and I needed several attempts before I made them. Sometimes I would break through Louis’ trail and be forced to wade desperately, using my hands and knees to try and make any progress at all.

The relentlessly steep final climb up to the summit of ‘Mt. Doom’

Thankfully, I decided to jettison my skis c.100m below the summit, following Louis up the increasingly scary ridge. One slip to the right and it was death by cliffs but on the left side the cornice of a south-facing slope drew closer and closer until eventually we were only inches from its fracture line.

Ahead of us the whole slope had slab-avalanched, with an extensive crown wall visible all the way to the summit. It was here I found Louis sat in the snow, looking hopelessly at the remainder of our route to the top. All it took was a cursory glance at the terrain ahead of me and I knew instantly that it was a no go. We were beaten. Again.

It didn’t take much discussion for us to agree that this was the end of the road for our summit attempt. I remarked that it was bitter and poor Louis sobbed in agreement, his voice cracking as he extended his axe shaft to meet mine in one last tap of solidarity, acknowledging the effort we had put into the climb and the shared decision we had reached. Then he turned and started to walk back down the ridge, down the way we had just come. 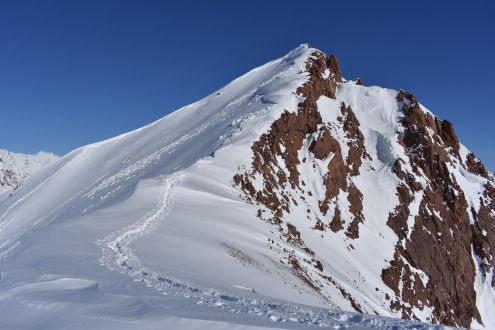 The summit of ‘Mt. Doom’ and the end of the road for our climb

Back down the ridge, back the way we came…

Reunited with my trusty skis once again

It was incredibly sad to see Louis so disappointed. He had put in so much effort, breaking trail the whole way with a relentless determination. We had done right by our mothers though…to proceed would have been reckless, especially so far from help or rescue.

We also weren’t out of the woods yet, not by a long shot, and getting back to where I had left my skis was the scariest bit of the climb. Thank god I had the wisdom to turn and face into the mountain as I descended rather than attempting to slide down facing forwards…that could quite easily have been the end of me. I remember reflecting at the time about how much more dangerous mountaineering was than polar bears. We were so much more likely to die from the former while in the Arctic.

The ski down was, if possible, even worse. My exhausted brain hadn’t been thinking at all and the wide slope I now had below me was one huge southerly aspect. YUK. Horrible freeze-thaw crust all the way down. No thank you.

Exhausted, we trudged onwards for home. Thankfully Louis suggested we take in the summit of what we came to call ‘Sugarlump’ mountain, a small rounded peak below the final ridge of Mt. Doom, and this at least (and at last) gave us a first ascent. Cue fun photos with the Union Jack and Cigars! It took the edge off our disappointment too, though it will forever seem a poor second compared to the prize we were seeking.

The ski down from Sugarlump was much better. The gradient was slightly too shallow for good turns, but it meant I got the maximum skiable distance out of my descent, with great snow in the gully I was forced into. There were many animal tracks to observe when I wasn’t dodging exposed blue ice, sastrugi and the rocks of the river bed. Just a shame I hit rotten snow at the bottom and had my biggest wipeout of 2018!

Plodding back through the moraine we rejoined our ski-tracks from the previous day’s trip to the Aries glacier, noting that a clever Arctic fox had clearly been using them as a highway. They are such amazing, resourceful little animals these foxes…hellbent on maximum efficiency with their every movement and incredibly far-ranging in their search for food. We even found fox tracks on the summit ridge of Mt. Doom!

The final 2 kilometres back to camp was good skiing but my right foot was in absolute agony by this stage. I was also incredibly thirsty. Here are a few vital statistics from our outing:

It was the toughest thing I’ve ever done.

One Comment to “Greenland – The Journal of My Journey (Pt. 2)”